“What profitteth a man for alle bis toyle
Under ye Sunne,” atte Schole or Colledge,
To slave and burn ye mydnyght oyle,
And cramme hys hede wyth uselesse knolledge!
“Of makynge bokes thereys no ende”
Say the ye wyze and wittie Soloman;
A truer worde was never penned
By hym or anie other man!
For knolledge ys butte “Vanitie
Of Vanities,” ye chiefeste ende
Andde buyinge bokes withouten ende
There ys no greater follie, man.
Butte yff thatte bookes ye sure must have
(Instede offspendynge monie on),
To save your sowl, and conscience salve,
I’ faith thenne goe and borrowe one!

(Im-) Moral: Never buy a boke iff thatte
ye can cozen one from a friend, and then be
sure to stikke your boke-plate on,?
on top off hys!
J. V. 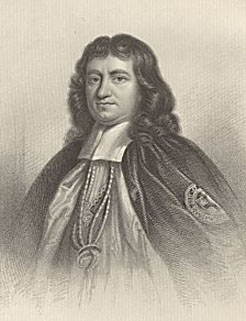 the bold, frank, boastful, noisy, and talented man who landed at Torbay with Dutch William and who showed ability yet much indiscretion, and who was honest in spite of every excuse for not being, merciful when all around him were full of bitterness and spite, had a book-plate in the ecclesiastical style, which is rare and valuable to-day. The plate bears the following inscription, Gilbert Burnet Lord Bishop of Salisbury Chancellor of the most Noble Order of the Garter; and behind the arms are the crosier and key with above them the mitre of his office. The royal motto of England, Honi soit qui mal y pense, is given upon the garter encircling the arms. The date of this plate is about 1690.
Robert Harley, Earl of Oxford and Mortimer, founder of the Harleian Society and collector of that vast accumulation of literary treasure which was purchased by Parliament and now under the name of the Harleian Collection may be seen in the British Museum, used a book-plate of the highest style of the art as developed in his day, in which his arms are shown along with nineteen other quarterings.
The plate dates somewhere about 1695, and is not readily obtained to-day.
It will be remembered that when Dean Swift used to take his exercise about the park in order to reduce his growing girth there often accompanied him, for the purpose of adding to his sparseness, that “thin, hollow looked” man, Matthew Prior, 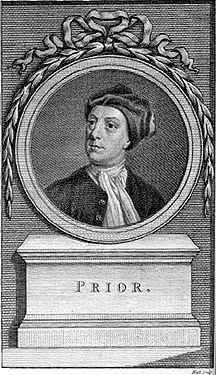 the wit, politician, and diplomatist, of whom Swift wrote: ” If his poetry be generally considered, his praise will be that of correctness and industry rather than of compass of comprehension, or activity of fancy. He never made any effort of invention.” Rather lukewarm praise this for one who aspired to some fame as a maker of verse and who had a fine wit which surely must have brought him some measure of “invention.” Anyway, Prior had a bookplate in which he called down Mars and Apollo and an angel blowing on the trumpet of fame to sit about his shield of arms, and this plate in good Jacobean style is one of considerable rarity and consequently of considerable value to the collector. John Bagford, it must be admitted, has rather an odious memory even among those who allow the followers of Granger some little claim to distinction as lovers and collectors of literary memorabilia. This man, who began life as an apprentice to a shoemaker, developed a desire for knowledge which took him from so humble a calling and sent him off on a tour through Germany and the Low Countries in search of material for a book on printing, which, however, he never wrote. The name ” biblioclast” has been angrily bestowed upon him, and there seems to have been good reason for it; for not less than twenty thousand volumes passed through his hands, from which he tore title-pages, frontispieces, wood-cuts, portraits, and ornamental letters, wholly destroying some volumes and mutilating, to an extent which was actual destruction, a great many others. When one thinks of the rare books that were thus put beyond the reach of the preserving hand of the collector, of the bindings which were executed for the great bibliophiles of the past, and of the engravings of the masters now wholly gone, this destruction makes the blood boil. Among the collections of this book-killer was found the earliest known specimen of a book-plate used by an English lady. This is the plate of Elizabeth Pindar, which dates about 1608. The motto she chose was, God’s Providence is mine inheritance.

There is a book-plate bearing the inscription William Cowper, Clerk of the Parliaments, which is sometimes erroneously attributed to the poet, him of Olney, the William of a greater fame. The way in which the office of clerk fell to this William Cowper, who was an uncle of the poet, is rather curious and interesting. When George I. ascended the throne, the office was held by a certain Mr. Johnson. One of the despicable creatures of the court was a man named Robethon, who succeeded in getting the office promised to him in futuro. No sooner was he possessed of this grant in certainty, than he sold the right for $9000! Upon the death of said Johnson the actual grant was made out, and the name to be placed upon it was ” anybody that Robethon should name.” The price named was paid by Spencer Cowper, as may be certified in the diary of his sister- in-law (Lady Mary Cowper, wife of the Chancellor, and Lady of the Bedchamber to Princess Caroline), where the transaction is entered under date of Dec. 25, 1714. Spencer Cowper gave the post to his eldest son, who held it until 1740, in which year he died. The book-plate is one of real interest in itself, being well engraved, and in the pure Jacobean style.
All lovers of books will recall the witty lines by Dr. Trapp, and the even more witty rejoinder they brought forth from Sir William Browne, the founder of the prizes for odes and epigrams at Cambridge, upon the occasion of the gift in November, 1715, from King George I. to the University of Cambridge, of some books, and the sending at the same time of a troop of horse to Oxford. Dr. Trapp wrote as follows: –
“The King, observing with judicious eyes The state of both his universities, To one he sent a regiment: for why? That learned body wanted loyalty. To th’ other he sent books, as well discerning How much that loyal body wanted learning.” To which Sir William made answer: –
“The King to Oxford sent his troop of horse, For Tories own no argument but force; With equal care to Cambridge books he sent, For Whigs allow no force but argument.”

The interesting history of the delightful Countess of Blessington is brought to mind by a very unobtrusive little book-plate which occupies the corner of a page in the album which contains most of the plates these pages describe. There is simply the coronet of the earl and the letters, M. B. When one thinks of the books in which these plates were placed and of the hands which may have handled them, when he recalls the visitors they looked down upon from their shelves in Gore House and the conversations carried on before them, as if they had no life, he regards the plate with something more than interest. Perhaps the very hands, the models of whose beauty in wax, ivory, and marble were to be seen at that house in Kensington Gore, had deftly pasted these bits of paper within the covers of the precious volumes. Here to this house, once the residence of William Wilberforce, where the rooms were large and lofty and whose garden was one of extraordinary beauty, with its extensive lawns, its terraces, and its flower-pots, came such people as the Prince Louis Napoleon, then a refugee; Count d’Orsay of course, who indeed made the place his home in order, for one reason, to escape the punishment due him for contracting debts amounting to $500,000; the old friend of Lady Blessington, the Countess Guiccioli, no longer the charming creature who captivated the famous poet; Dickens, and John Forster. Misfortune overtook Lady Blessing- ton, and her house was sold under the hammer, the price it brought just about paying her debts, which amounted to some $60,000. She went to Paris, where the d’Orsays and the Countess Guiccioli, now the wife of the Marquis de Boissy, an old French nobleman who boasted of his wife’s intimacy with Byron, received her kindly. When she died in 1839, d’Orsay raised a beautiful mausoleum in her memory in the churchyard of Chambourcy near St. Germain-en-Laye. The ground around it was covered with turf and ivy brought from her old home, and within were two sarcophagi, one for her and the other for d’Orsay, who survived her but three years.