PRESENTING
A BRIEF SURVEY OF PROGRESS
IN MACHINERY, METHODS
AND ORGANIZATION
MADE DURING
THE YEAR
1913-14
By E. WOODMAN PALMER
NEW YORK

The year 1913 has witnessed great changes not only in manufacturing processes, grades and characters of material, but in the conditions under which binding is handled.
In years past the development along new lines has been limited practically to the production of books; in styles much similar to those previously put out, but with savings either in the processes of manufacture or in the materials used—the tendency for a number of years being to cheapen the product to suit the demands of the publisher. This has changed to a marked degree in the past year. The revival of subscription book publication, which a few years ago encountered a serious setback, has been productive not only of an increase in business for the book manufacturer and the binder, but has given opportunity to bring out and develop new ideas in plant equipment, operating methods and conditions of the employed. These things have been reflected in the character and quality of the products. 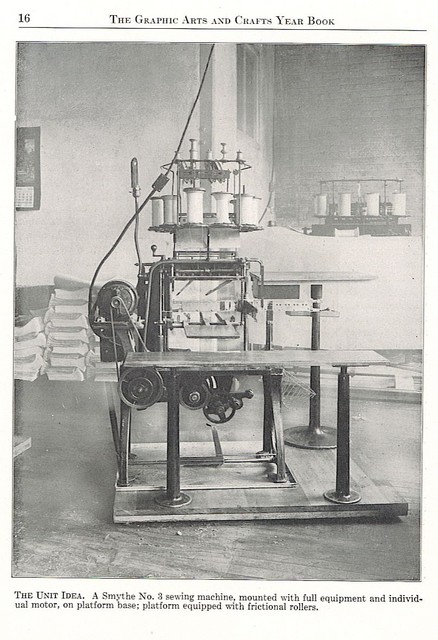 At the present time a much larger majority of the works of present-day authors are being manufactured than heretofore. The old standard works are still manufactured, but an ever-increasing quantity of new subscription lines has been opened up. In binding, as in no other end of the manufacturing, has this given new opportunities,
The tendency still exists in fiction bindings to produce a book manufactured as attractively as possible at the very lowest item of expense. A few years ago, a novel which sold for $1.50 carried a binding costing around 20 cents; today the majority run from 10 cents to 15 cents, but withal are more attractive, have more harmonious cover designs and are better in general effect.

By far the greatest progress during the past year in binding has been made with regard to the India, or Bible paper as it was formerly called. Bibles, for many years, were printed on an opaque India paper usually manufactured and oftentimes printed abroad. With the production of the Encyclopedia Britannica, llth edition, on India paper, it may be said that a new era was established for subscription work, and in fact for many commercial lines. The saving in bulk, in weight, in convenience, and cost, can be readily understood. This work, from a commercial standpoint, has opened up still newer developments. It has resulted in new processes, and has encouraged the manufacture in this country of many subscription volumes, both in cyclopedic and other reference lines. This will be treated later on in the general discussion.
It can be said in truth that enormous progress has been made in the past year in reducing the cost of binding, in increasing production, in insuring more satisfactory bindings, and in bettering the condition of the workmen. We shall take up briefly the various items of progress as noted from contact with the foremost book manufacturing and binding houses of the country.
Manufacturing conditions during the past year have undergone changes, which a few years ago would have been considered exceedingly radical.
The position of the employer to the employee has assumed an entirely different aspect. A year or two ago a bindery was simply a workshop where the employees entered in the morning and left at night, having completed a good day’s work or a poor day’s work, depending upon superintendence, and their ability and desire to produce work evidencing their personal interest. Scientific management was practically unknown, or if known at all, was considered ”smart management” or shrewd “driving.”
In many plants throughout the country, the Taylor plan of task and bonus is now being worked. The majority of readers are familiar with the application of the Taylor principles to manufacturing problems in other lines. Few, if any, know of the progress which has been made in applying this principle to binding. All of us agree that; certain fundamental principles occur in any line of work, and once having established a maximum output under certain ideal conditions, provided those same conditions exist time after time, the result should be an established standard, both in quality and quantity. The bindery offered an excellent field of study for establishing a uniform task, and once the task had been established, a bonus of a certain pro rata amount was easily determined. This enabled employees of average intelligence, working under careful instruction and with a desire to do their work well and quickly, to exceed their former earnings by an increase of from 10% to 80%. They worked no harder than before but gave a product which enabled the employer even after paying the bonus, to show a material saving over the former condition, at the same time securing an increased production.