published in 1905 by the International Correspondence Schools Reference Library

This chapter on BOOKCOVER DESIGNING also includes a sub-chapter on Ex-Libris design which I have included in the essai as it is originally part of it.

It is presented here in its original form, as it was published 100 years ago.

BOOKBINDING , EARLY STAGES OF THE ART 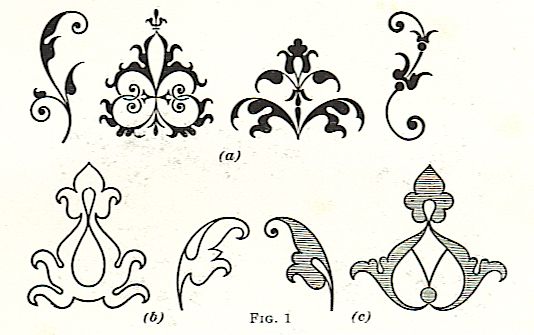 These tools in their three forms are illustrated in Fig. 1, where at (a) are shown the tools as derived from Italy in their solid form, at (b) their variation by simply the use of outline, and at (c) their further variation by the shading of the outline in order to give a little more strength. The form of these devices is plainly borrowed from the arabesques of Italy, and, separated from the elaborate interlacings with which they were there associated, show their outline to be distinctively of oriental or Arabian origin, from which they derived their name as arabesques. These simple devices connected by a long line of scrolls and interlaced bands formed the entire theme of bookcover design during the first period of the French Renaissance.