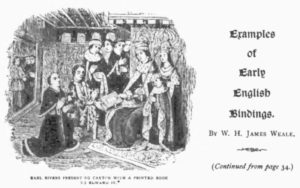 OF the following examples a to e are from English, and  f to l from German bindings.
The earliest (a), from the cover of a manuscript of the Book of Wisdom in the British Museum (Add. 24076), dates from the first half of the twelfth century ; (b), four examples from the covers of the first and fourth volumes of the noble Bible written and bound in the monastery at Durham for Hugh Pudsey, bishop of that see from 1153 to 1195 ; (c), from the cover of the B.)ok of Isaiah with glosses, given to the cathedral of Durham by Master Robert of Haddington ; (d), from a Psalter with glosses bound for Bishop Hugh Pudsey ; all these are in the cathedral library. An example from a London binding of the end of the twelfth century is figured on page 4. (e). two examples from a Summa super Graliani in the British Museum (Add. 24659) bound in the thirteenth century.
(f), is from the border of an Augsburg Missal bound about the year 144.; (g.), from a Basel Missal of about 148o; (4), from a volume bound at Passau in 1482 ; (I), from a book ‘printed at Milan in 1482 and bound in South Germany before 1491 ; (k) from a volume bound at Passau about 1491 ; (1), from a Missal bound at I.ueneburg about 1486. I have met with several other examples on bindings executed in the monastery of the Holy Cross at Donauwbrth, at Augsburg, Passau and Pressburg. In the British Museum there is a copy of the Homilies of S. Basil bound in the fourteenth century in the monastery of Detchani in Old Serbia, the border of which is formed by the repetition of a rectangular stamp with an ornament formed by two palmated leaves point to point.
Another favourite way of decorating the covers of books was with interlaced work, which occurs on bindings from the earliest times down to the seventeenth century. There are several distinct types of interlaced ornament. The earliest examples were apparently executed with a style. Such is the case with the band of ornament and border (A) from a binding executed in the north of England in the tenth century, or perhaps even earlier.
A similar border, but more rudely executed, occurs on the leather cover of the Book of Armagh, which is decorated with animals and interlacings in compartments—a typical example of Irish ornamentation of the eleventh century.
The second type was produced by means of two stamps, one straight, the other curved examples occur on several bindings executed at Durham in the twelfth century and the commencement of the thirteenth.

From a miniature in Lambeth Pallace  Library. 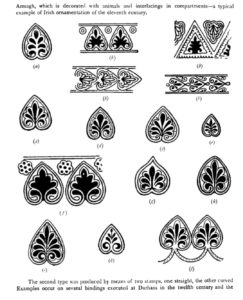 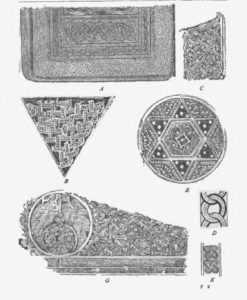 A variety of combinations of these adorn the covers of the first three volumes of the noble Bible, given by Hugh Pudsey, Bishop of Durham, (1153-1195), to the library of his cathedral, as also on a Psalter of the end of the twelfth century (B), now in the British Museum. These designs were probably imitated from the bands of guilloche ornament frequently found on Roman mosaic pavements, or possibly from Oriental work. Sometimes the spaces between the interfacings are impressed with a third stamp, a small circle with a dot in the centre, as on the binding of a Gospel of Saint

Matthew, with glosses, given by Henry, son of Louis VI. of France, to the Abbey of Clairvaux in 1146 (C), and on two volumes given by Master Robert of lladdington to the Cathedral of Durham at the end of the twelfth century. One of these has a border of interlacing chain-work produced by the repetition of an oblong stamp (1)), the only example of an early date that I have yet come across.
Beautiful examples of interlaced work are found on the bindings of Arabic manuscripts of the fourteenth and fifteenth centuries. (F) is from the flap of a manuscript bound in 1360. The corner ornament (F) is from another book cover of the fourteenth century which has a fine ten-foiled centre ornament filled with similar interlaced work. (G) is from the flap of the same cover ; (H) a narrow border of tasteful design, c. 1380 ; (I) a border of c. 1384 ; and (K) a stamp-produced border, c. 1400.

UNTIL twenty-five years ago, Art Bookbinding was almost unknown in Germany, and the craft altogether was in such low state, that young workmen coming from that country to this, looked with amazement at the solid and substantial English bindings. For a century, the craft in Germany had sunk into a deplorable condition, and the public in general seemed
to have lost all knowledge and taste for fine bindings. The great Universal Exhibitions of London, 1862, and Paris, 1867, where beautiful book-covers were a great attraction, gave the first impetus to our art trade, not only in England and France, but also in Germany and other countries on the Continent.

Soon after this time we find, in Berlin, the first journal issued for Bookbinders, intended to raise the trade from the lethargy it had fallen into, and to educate masters, as well as the public, to a more refined taste with regard to the ornamentation of books, and also to produce more solid and substantial bindings 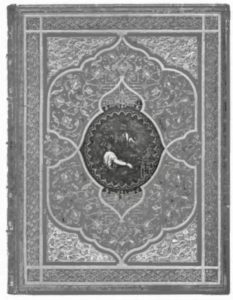 This paper, Die Illustrirte Zeitung fur Burchbinderei, has now been established for twenty-one years, and has over 8,000 subscnbers. These figures speak for themselves, and tell Us how much trade literature is appreciated in Germany. The journal has succeeded so well In its task, that at present German Art Binding stands almost equal to that of England or France, and bids fair soon to eclipse any bindings in the world. this paper has also called into life a Confederation of German Master-Binders, an institution which has been productive of much good to the trade, bringing masters of all parts of the country in closer contact with each other, for which purpose they hold an annual conference in one of the principal towns,
attached to which is an Exhibition of all new and improved machinery used in the trade, together with master-pieces of binding such as have been executed during the year.
The design we now give is from a book of Persian poems by Mirza Shaffy, which was exhibited at the last Bookbinders’ Conference at Breslau. The German press pronounced it to have been the cluidceuvre of the Exhibition, both in design and workmanship. It was bound and finished by Herr Carl Schultze, a young German binder of Dusseldorf, who was for some years in the employment of Mr. Zaehnsdorf, and then gained considerable
knowledge in the execution of fine bindings. The design is by Dr. Kisa, of the Dusseldorf Academy, and thoroughly Oriental in style. The book, of large quarto size, is covered in deep crimson Levant morocco. The centre piece is a beautiful oil painting by the same artist, and sunk in the board, surrounded with an elongated panel of deep yellow morocco, finishing witha a ribbon of inlaid white morocco. Then follows the “fond” of the side, showing the original colour of the cover, ornamented with scroll work, and oriental tools, which are all brightened with light green, red, and white morocco. ‘The corner pieces are inlaid with pale blue, and again surrounded by a double ribbon of yellow and white morocco, connecting all four corners, as well as outer border, which consists of a beautiful running design formed by a repetition of only two tools with a corner piece. 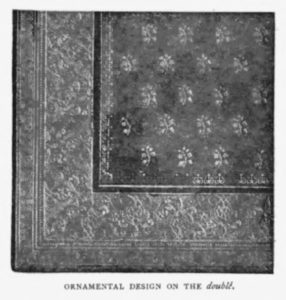 The inside (double) of which we give a quarter of the design, consists
of a rich deep red satin, studded all over with a small Persian flower tool
in gold. The satin is also surrounded by a broad inlaid border with oriental tooling. The ribbon in a zig-zag form is of a pale yellow colour with red and green studs, while the tooling between is inlaid with red and green morocco. The tooling of the gilt edges is painted in different colours, and gives a
very pleasing effect. The ornament on the back is quite in harmony with the sides. The whole work is very clean and accurately executed, and reflects great credit on the young master, to whom we wish every success in his future career.
The book is exhibited in the show-rooms of Mr. Zaehnsdorf, 14, York Street, Covent
Garden.

IT is universally admitted that the literature of English Bookbinding is extremely scant.
The aim of these notes is to draw attention to the subject, to record the result of the water’s observations, and to invite the co-operation of students engaged in similar pursuits. Because it is only by combined effort that a complete history of English Bookbinding can be written.
Mr. Weale—whose papers all true lovers of ancient bookbinding will welcome—seems to have missed the meaning of these notes. Therefore I will endeavour briefly to explain. Taking the passages in the order in which they occur in Mr. Weale’s article, we have, first
(1.) That the method of ornamenting stamped leather bindings by means of a large block panel ” probably originated at Ghent”—probably, not certainly. Early Ghent bindings are very numerous.
In the University Library at Ghent the following early examples are preserved
(a.) A small 8vo. volume having on each side a panel with the figure of S. Jerome, the towers of Ghent in the background, and at the base the words, “Gaudani in edib’ fr’in” —in edibus fratrum, that is, from the establishment of the confraternity of brethren known as ” Hieronomites.” This binding is evidently of the fifteenth century.
At the commencement of the sixteenth century several publishers and bookbinders had established themselves at Ghent ; one of these was Victor von Crombrugghe, or Curvipons, whose name occurs in the Archives of the Council of Flanders, A.D. 1509. In 1518 his widow was carrying on the business.*
(b.) A reproduction in facsimile of one of the bindings by this artist may be seen in the 6th vol. of the Bibliographic Gantoise, by M. F. Vandertracghcn—to whom I am indebted for much courtesy. This panel represents the Maid of Ghent, seated within a circular field surrounded by a palisade; the Maid holds the right paw of a lion, who holds a flag in his left paw ; upon the flag, in gold letters, is the word GI-1 ENDT. In the background are the towers and dragon of Ghent, and at the top are the initials V.C. in gold; the figures of the Maid and lion are gilt also.
(c.) M. de Saint Genoist mentions a binding by Pion or Piere de Keysere, of Ghent, (circa 1516); the panel of this beautiful binding also represents the Maid of Ghent and the lion, with the towers of the city in the background, and the name ” Petrus Cesaris” below the figure.
(d.) And at Louvain there is a chartulary of 1367, bound in an early Ghent binding, upon the sides of which there are subjects in four compartments.
I think the facts stated above furnish sufficient data upon which to hazard the assertion that probably the style of large block ornament originated at Ghent. If Mr. Weale will adduce evidence to prove that the style originated elsewhere, I shall feel indebted to him for the information.
• Bibliographic Gantoise, vol i., pp. 26, 31, 46. Managers des sciences  Historiques, 1853, p. 239.