The beautiful gloss which we see upon finished marble paper does not appear upon it when it first comes from the marbler’s hands. This gloss is the result. of a subsequent process of burnishing, which is represented by the engraving on the image below. 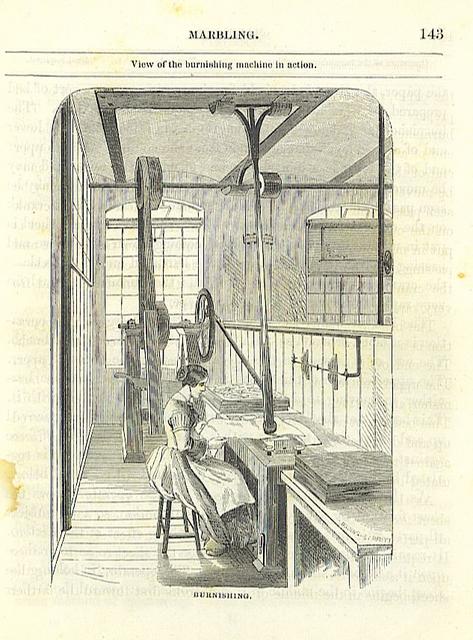 The burnishing is produced by means of a piece of polished flint or agate, which passes rapidly to and fro over the surface of the paper. The stone being held for the purpose upon a sort of bed prepared for it to lie upon, on a very solid bench or table. The burnisher, as is shown in the engraving is attached to the lower end of a long lever that descends from the ceiling. At the upper end of the lever is a joint, by means of which the lower end may be moved to and fro. Near the lower end is a bar, which may be seen passing off toward the Window where it is attached to A crank on the outer side of the wheel. When the axle of that wheel is put in motion by means of the band coming down from above and passing over the pulleys — seen at the left-hand end of the axle — the crank is turned, and the bar pulls the burnisher to and fro very rapidly over the surface of the paper.
The bed on which the paper rests while undergoing the operation is a block of wood set in a frame that is screwed to the bench. The end of it is seen in the engraving, under the sheet of paper. The upper surface of this block is made concave, that the burnisher, in moving to and fro, shall always be in contact with it.
This bed is not absolutely fixed, but is susceptible of being moved up and down, so as to press with a greater or less degre of force, against the burnisher, as may be required. This pressure is regulated by means of a strong spring connected with a pedal below.
As the process of burnishing goes on, the operator draws the sheet forward by a very slow and careful motion, so as to subject all parts of it in succession to the polishing effect of the friction. It requires considerable skill to manage the sheet so as to produce upon it a smooth and uniform gloss. The operator, in holding the sheet, begins the middle of it, and works first toward the farther side by drawing the sheet gently forward as the process goes on.
She then turns the sheet, and, taking the half already polished toward her, she proceeds with the opreration on the other half in the same manner.
Not only marbled papers, but colored papers of all kinds are burnished in this manner.

The stone pictured below is the stone described above, it would have been secured at the end of the balancing lever. 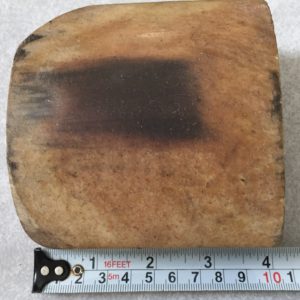 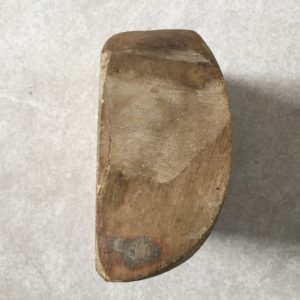 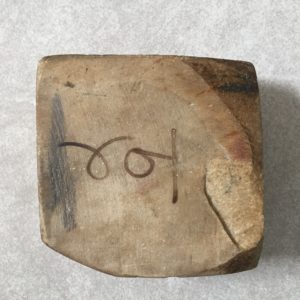