THE “VELLUCENT” PROCESS: A NEW METHOD OF DECORATION FOR BOUND BOOKS. 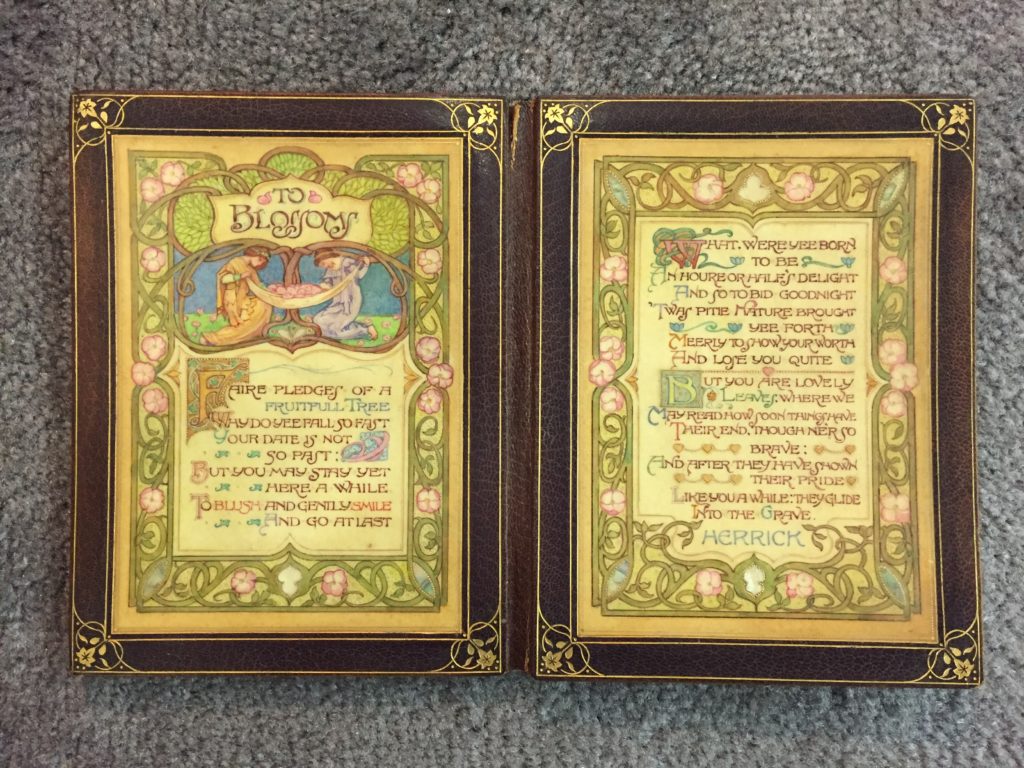 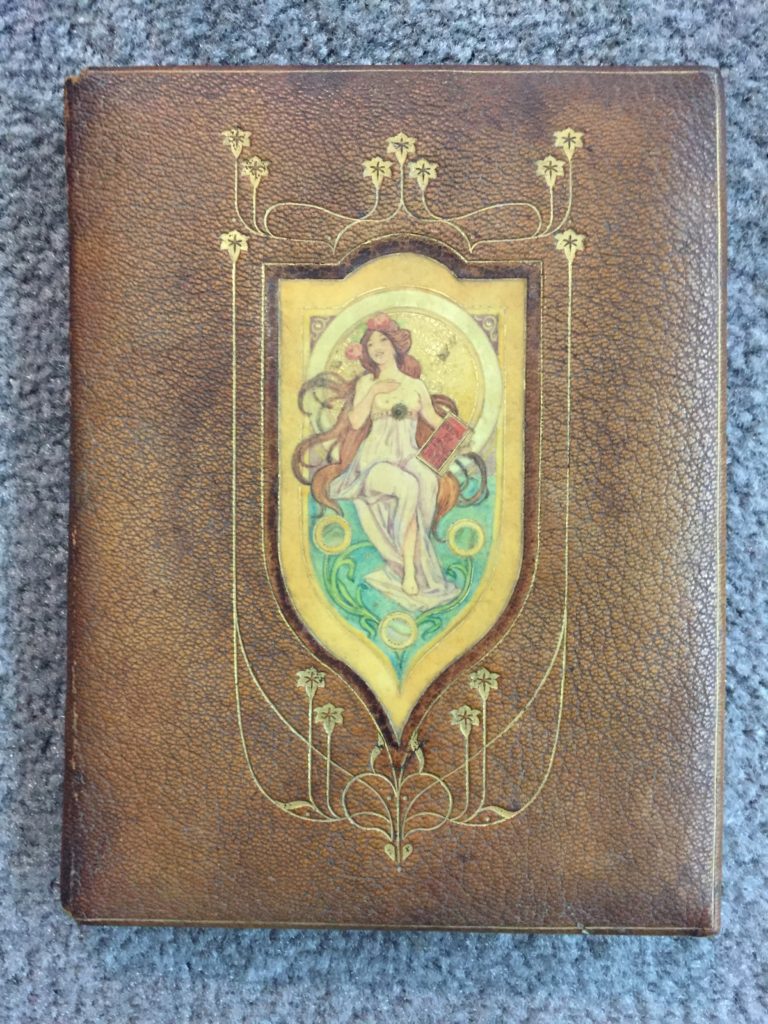 SOME years ago a remarkable method of decoration for the binding of books originated in the fertile mind of Mr. Cedric Chivers of Bath, England, and after making several experiments, which gave promise of future successful employment of artists with fresh ideas of treatment, designs were prepared for binding to be produced under the required conditions. Specially selected skins of clear unstretched vellum were the simple and legitimate means employed, and after a few further trials and experiments, the result proved the new method to be wider in scope and more varied in its range of artistic possibilities than any previously attempted. 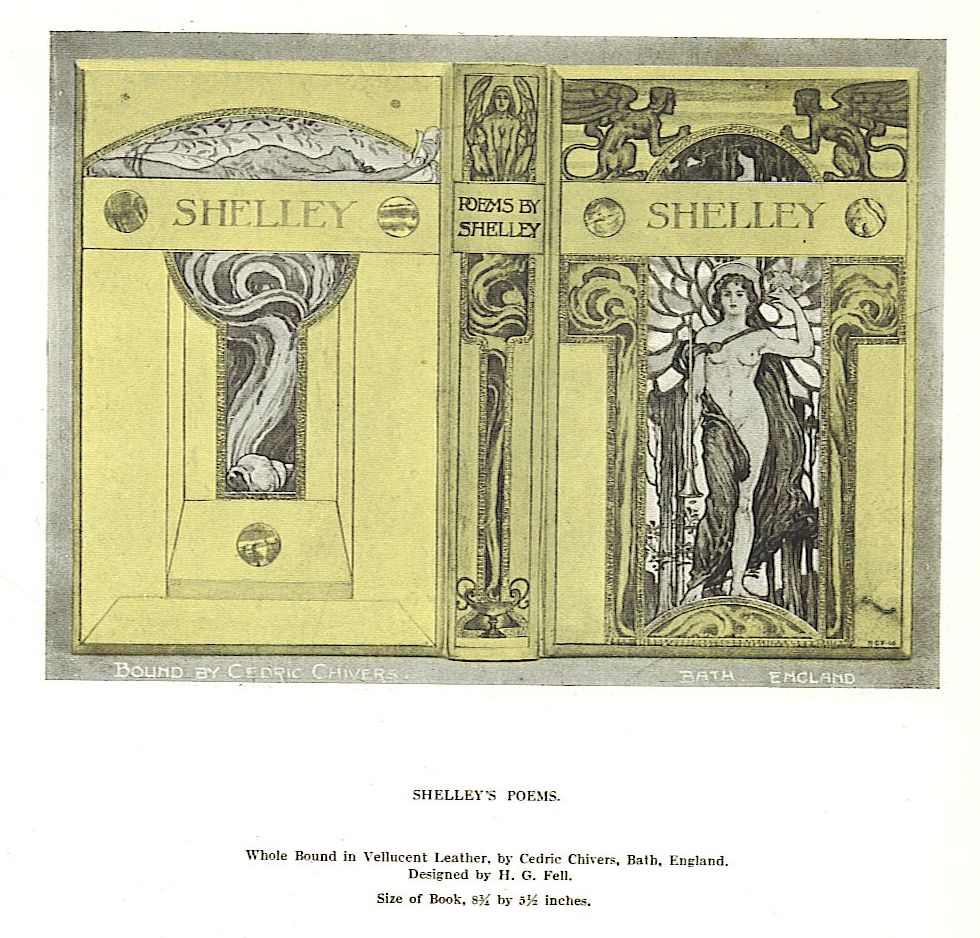 Since the art of gilding leather was introduced into Europe from the east, about the year 1740, by the Venetians, nothing new in the external decoration of books has been achieved which gives such endless opportunities for beautiful and permanent decoration as does the transparent vellum, or “Vellucent,” method. Originally, leather-bound books depended for decoration mainly upon the blind impressions the leather received from brass dies or blocks. The introduction of gold was a distinct advance, giving as it did a more brilliant and satisfying result, and this method has remained for the past four hundred years the chief means employed in the ornamentation of books. To obtain varied effects in colors, dyes, stains, paintings and inlayings, have all been used. Painting upon the surface has been generally discarded, owing to its liability to damage by friction. Stains and dyes have proved destructive to the leather, so that inlaying of different colored leathers has become the method most generally employed as a means of obtaining effects in color. 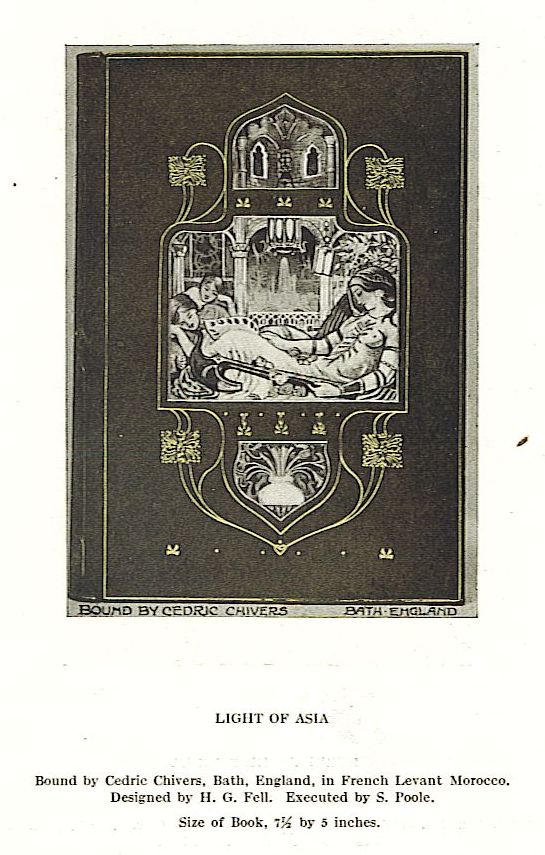 This plan of coloring, however, has its very strict and obvious limitations. The impression of engraved tools, either blind or in gold, very closely circumscribes the field of fancy for the art-worker in book-decoration, The “Vellucent” method, on the other hand, allows of the utmost freedom of conception compatible with the tenets of good surface decoration; and, since by reason of its nature, greater liberty of pictorial treatment is legitimised, the field both for design and color becomes almost limitless.
It has sometimes been charged that external book decoration could not legitimately be classed in the graphic arts, but if graphic delineation on flat surfaces be a correct technical definition, then this “Vellucent” method warrants its inclusion. 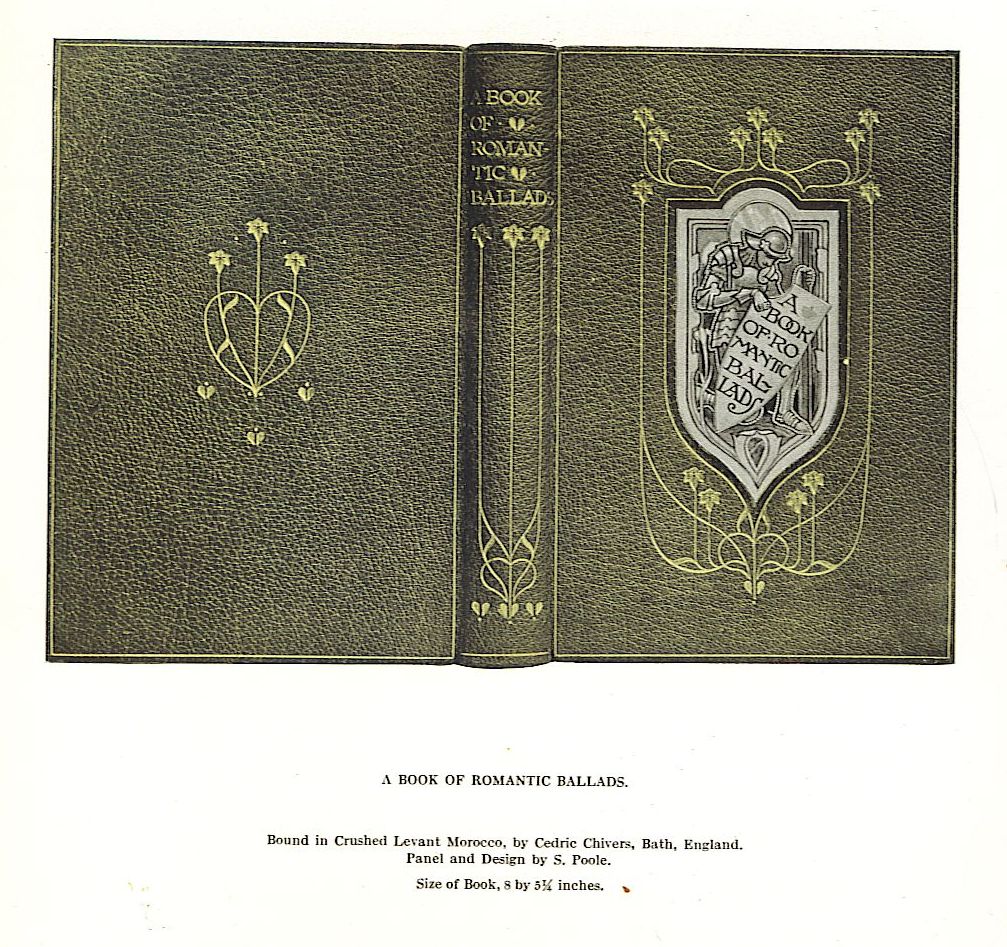 The permanency, strength, toughness, and durability of vellum as a binding material has for ages past been fully recognized, and the fact that the surface is capable of being cleaned without injury, being impervious to the action of damp, was an important point in Mr. Chivers’ deliberations while dealing with the external decoration of books by the particular method he had in view. This method is perfectly simple and logical in its process.
The designs were first painted or drawrn in colors with as full a palette or as subdued a richness of coloring as the artist chose to employ. Various iridescent materials and precious metals, pared to the thinness of paper or even of gold leaf, according to the fancy of the designer, were often introduced to enhance the richness of the scheme; mother-o’-pearl, shell, beetles’ wings, these and other beautiful materials were utilized in the carrying out of the designs with the greatest felicity of effect. The transparent vellum was then laid upon the surface of the painting and the two pressed together till they became indisseverable. Gold tooling was now superimposed upon the surface of the subcutaneous coloring, often with results surprising in their richness and beauty. Indeed, the vellum itself, though of perfect transparency, has, from its delicate warmth of hue, the quality of rendering luminous and reconciling colors otherwise difficult to combine harmoniously in juxtaposition, its appearance being that of a beautiful enamel-like glaze. The whole field of color, of iridescence, is thus open to the artist who elects to decorate books bound in “Vellucent.”
It may be claimed that the color effects produced, seeing the nature of the materials employed, exceed in brilliancy and beauty anything in the whole range of artistic expression yet achieved. A book when complete will stand constant use and everyday wear and tear; it has neither excrescences nor protuberances; is absolutely flat, smooth, and pleasant to handle. The design, however beautiful and precious, is permanently secured from dirt and damp in one of the strongest and best materials ever used for the binding of a book. The iridescent and other materials used have been the subject of the most interesting experiments. In spite of the novelty and seeming incongruity of the idea, step by step, each new introduction was carefully thought out,, and a trial made of its adaptability under translucent vellum, Mr., Chivers adopting a wise policy of restraint in allowing only those effects entirely satisfactory to the trained eye of the artist to be accepted for use. 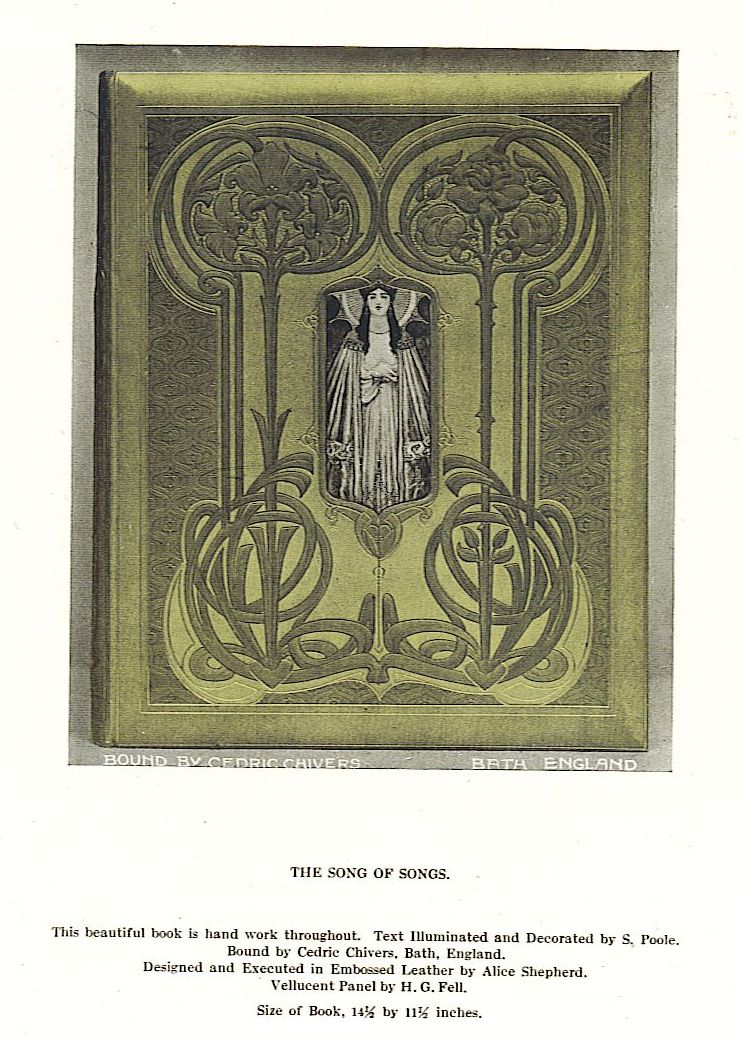 Mr. Chivers has also utilized his method with great effect in the treatment of illuminated addresses, some specimens of which rank among the most successful productions of his house. He appears to favor for this class of work the style and form of a bound book, using his vellucent as a means of covering and protecting the address proper, and frequently reverting to the solid leather outer binding with an inlaid “Vellucent” panel in the centre to contain coats-of-arms, or other designs, amid a framework of gold tooling.
In many cases these “Vellucent” panels of varying shapes have been introduced into tooled French levant and repousse leather bindings,, the effect of the sparkling and jewel-like spot of color set in the deep rich tone of the leather being very beautiful. Another good effect that may be obtained is by conjunction or combination with small mosaics, or inlays of colored leather.
Many of the books are bound in whole vellum with colored designs underneath and gold tooling on the surface of the vellum. Other books are bound in crushed and gros grain French levant with decorated vellucent panels. And again, other books are done in hand-embossed leather with vellucent panels used in the decoration. 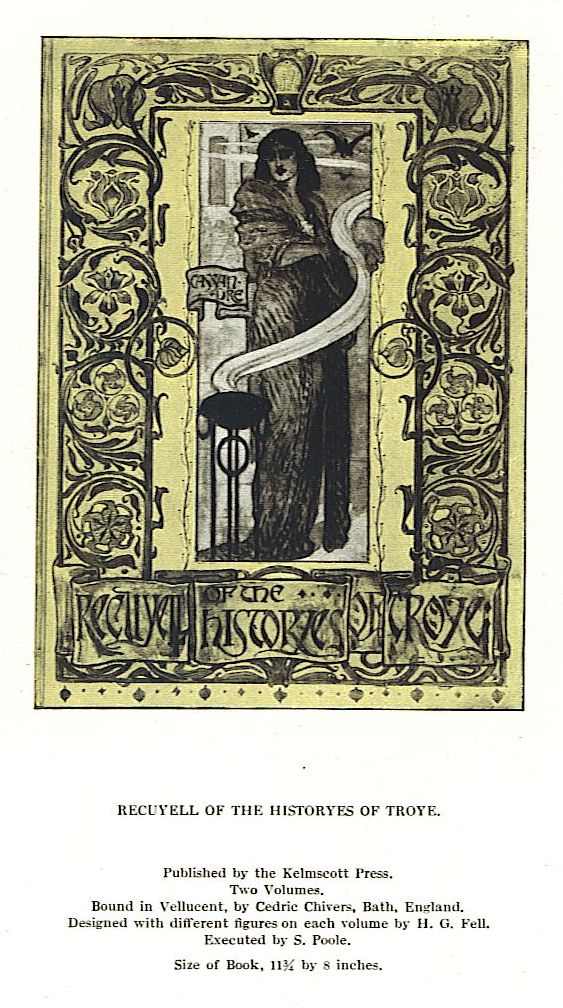 Besides continuing the best traditions of French levant binding, with its conventional yet beautiful and intricate mazes of gilded line work and floral fantasy, it has been the earnest endeavor of Cedric Chivers and the Portway artists to strive to fit to the covers of the book something more appropriate to the present time, something more eloquent of the artistic feeling and spirit of the age. Now that this, the springtime of the New Renaissance in design is making its influence felt in every sphere, budding and blossoming out in various forms of freshness and beauty over almost every field in which Art legitimately claims to weave her magic garlands, it is strange indeed to reflect that one of her most fruitful parterres has for so long lain fallow; not through neglect certainly, but for want of new and vigorous measures of cultivation, 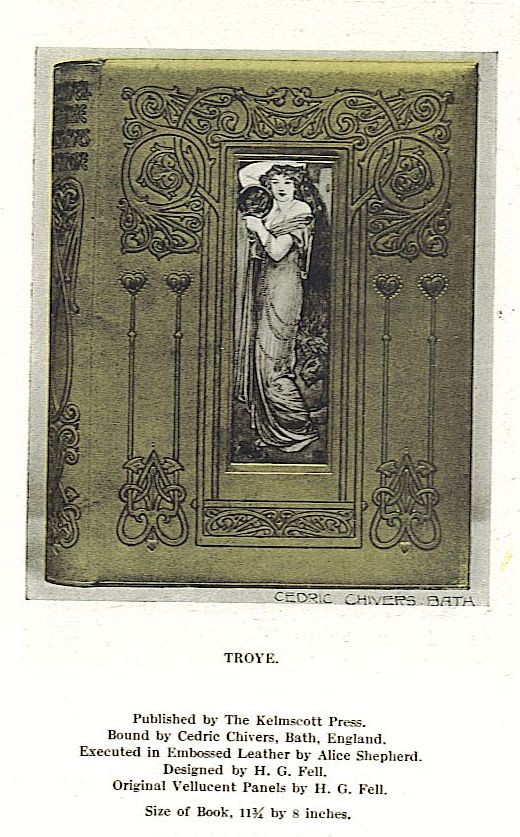 The experiments undertaken and carried out with success in the new forms of decorative binding will appeal to everyone interested in the development of modern art; and it is not too much to affirm that the invention of the “Vellucent” process inaugurates a new epoch in the history of bookbinding. The full glories of color hitherto denied as embellishment: to the book-cover—the folding-doors of the literary treasure-house—are now made not only possible, but eminently and especially legitimate and appropriate. 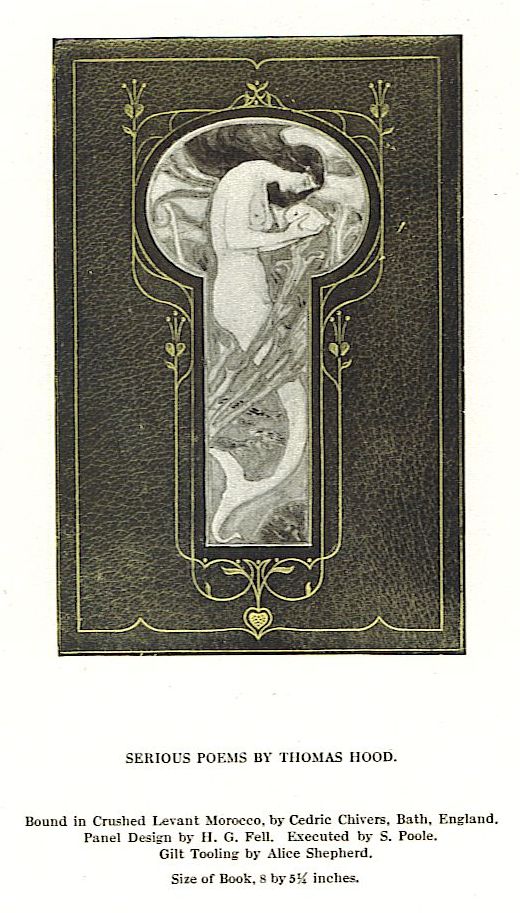 It is difficult indeed not to become enthusiastic over the idea of the gorgeous aspect of a wealthy booklover’s library of “Vellucent”-bound books, which may become at the same time a cabinet of works of art, each one of his choice and rare volumes bearing an unique specimen of the book decorator’s skill, and embellished with the most varied and brilliant effects. 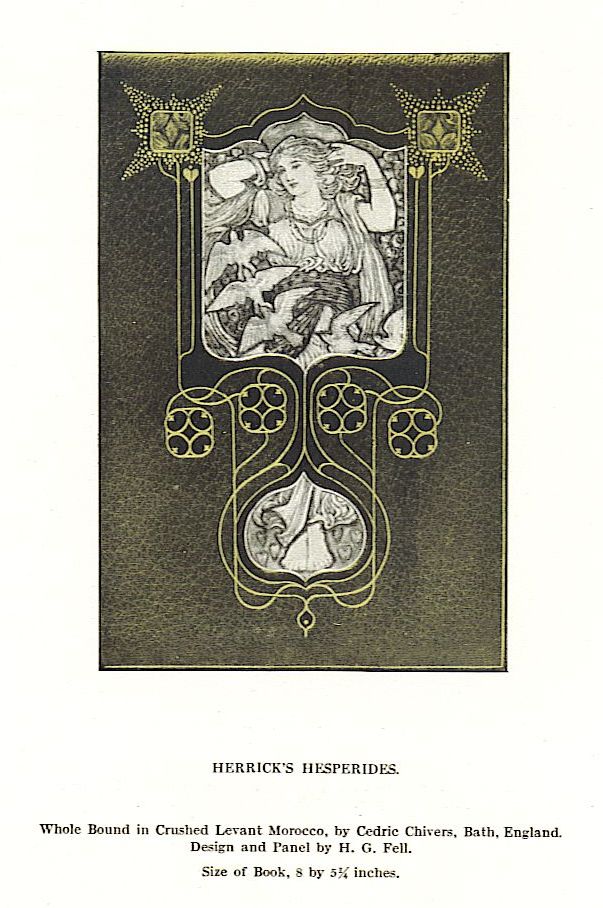 Here is given unlimited opportunity for the artist, while his work remains unassailable from the point of view of the binder as a craftsman.