Requirements of Bookcover Designs.
Modern bookcover designs do not follow closely the styles of the ancient historical bookcovers, owing to the great change in the methods of manufacture. It is necessary, however, that the designer should be familiar with the historical styles in order that he may introduce a historical character into his modern work when the circumstances require it. In submitting a bookcover design to a publisher, there are three things that will determine its practical value: First, its originality; second, the expense of its reproduction; third, its technical perfection.
If the design is not original and attractive, it has no value whatever, no matter how cheap its reproduction may be or how perfect the drawing. If the design be excellent in character, it may be so expensive in reproduction that the excellence of the design is entirely counteracted, for there are limits in every case to the expenditure that can be afforded in the reproduction of even the most attractive covers. A design may be original, simple, and inexpensive to reproduce, yet utterly worthless, owing to the fact that the designer has not properly considered the technical limitations that are concerned in its reproduction.
Occasionally an author may select a design, and, being unfamiliar with the difficulties to be encountered in its execution on the finished book, may overlook some of the foregoing details, but his publisher is sure to discourage its use; and though the design may have been ordered and paid for, its impracticability will prevent the author from again employing the same designer. Such a design, therefore, does the designer more harm than good.

Knowledge of Reproductive Processes Necessary.
While the originality of a design and the skill of its execution are of great importance in assuring its acceptance, it is necessary that the drawing be technically correct in every detail and that it can be used by the publisher without the slightest alteration to suit it to commercial requirements. The prospective bookcover designer must therefore give careful attention to the commercial requirements and limitations in the reproduction of modern bookcover designs, and he must be practically familiar with every detail of the processes that a design passes through, from the time the cartoon leaves his hands until its counterpart appears on the finished book.

Bookcovers, in general, may be divided into two classes: the tooled bookcover and the printed bookcover. The tooled bookcover is entirely hand work, the printed bookcover entirely machine work, the former being the ancient and historical method, the latter the modern commercial method. Tooled bookcovers are rarely used at the present day except for rare editions of historical works, or for single books that are bound for individuals. Designs for the imitation of tooled covers to be executed by a printing process are made in precisely the same manner as other printed designs hereinafter described, but designs for actual tooling are usually made by the craftsman himself and executed by him on the finished leather binding.

TOOLED BOOKCOVERS
Modern Tools and Tooling.
The tools used in modern bookbinding vary in form and design from those used in historical binding, as shown by comparing the impressions in Fig. 19 with Figs. 1, 11, and 14, but are often combined with the historical designs to fulfil some modern requirement. 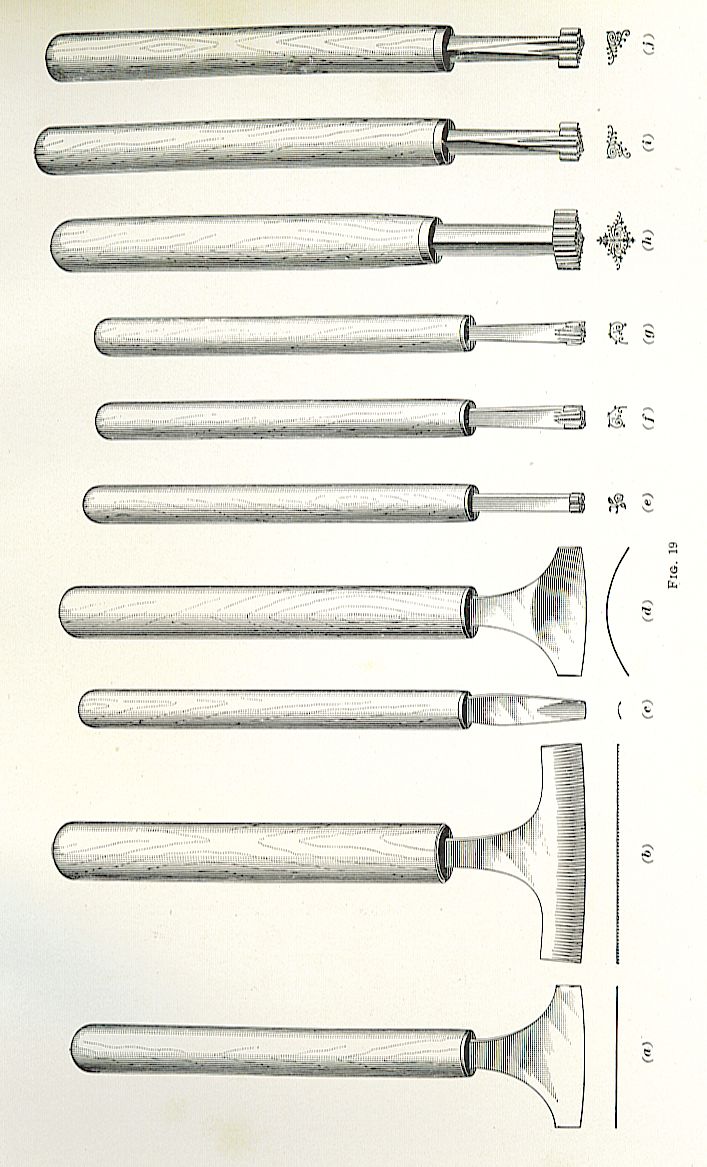 Each tool consists of a brass form, or stamp, in the end of a wooden handle, that is heated and pressed into the leather to form a detail of the design. The flowing lines connecting separate details are executed with curves similar to those shown at (d), varying in form so that the lines can be carefully followed and the design worked out in detail. The forwarded and finished book, complete in its leather cover, is turned over to the craftsman for tooling. He sketches his design in pencil on thin paper, working up all the curves for the entire cover very accurately, and when completed mounts it on the book by means of a little paste at the corners. With his tools heated to a temperature somewhat over 200 degrees he then presses these pencil outlines through the paper into the leather, using different tools in order to form the outlines and especially made devices, if necessary, to carry out certain details of ornamentation.

In Fig. 20 is shown a modern tooled book back executed with the tools shown at (b), (II), (i), and (j), in Fig. 19. It will be observed that comparatively few tools were required to do this work. Long flowing lines can be made by a combination of gouges (d) or curved tools, and the devices can be repeated frequently by several stamps containing such ornaments as are required. After the design is executed, the paper is removed from the leather, and if the work is to be further ornamented with gold leaf, further tooling will be necessary.
Where the plain design is pressed into the leather it is called blind tooling; where gilded, it is usually referred to as tooled in gold. Where gold is to be applied to the cover, a size composed of albumen or other fluid material is applied over the entire design with a fine camel’s hair brush, and when dry, small pieces of gold leaf are laid over the depressions caused by the blind tooling, and with the tool reheated are forced into the depressions already formed, to which they adhere, owing to the presence of the size. When the entire cover is gilded, the surplus gold leaf is wiped from the surface with a piece ot oily cotton, and the leather cover tooled in gold is complete. On the back of the book the title is impressed in a similar manner by means of brass letters set in forms with wooden handles similar to those on the tools. Lines emphasizing the structural character of the bands along the binding are impressed with straight-line tools. Small ornaments in the panels formed on the back by these bands are stamped with single tools or occasionally with combinations of several tools, but the character of a properly tooled book is entirely that of the craftsman that executes it. In commercial work, an entire cover is occasionally stamped in gold as an imitation of tooling and the back alone handtooled, and in some instances the entire cover, including the back, is stamped at one time, in imitation of tooling. In such commercial work as this the cover is made and stamped before it is applied to the book, whereas in the true handtooled work the book is bound first and the tooling executed afterwards.
While the designer for this class of work has to exercise his ingenuity to make his work entirely original and in accordance with modern ideas, yet a thorough familiarity with historic styles of book tooling will be of the greatest value.