ENCOURAGEMENT TO THE YOUNG. 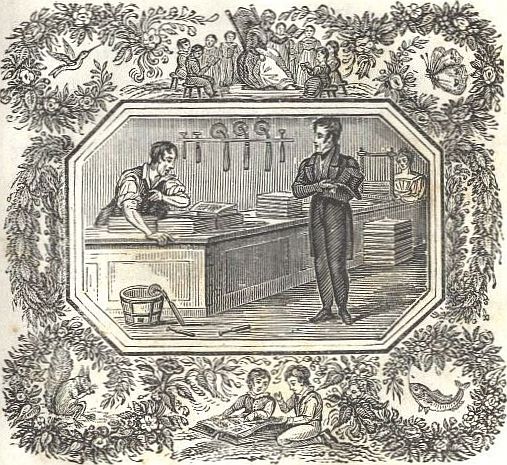 MR. FARADAY, now aged forty-two, at the head of one of the noblest of the sciences, honoured as the compere of Cuvier, Laplace, and Buckland, was the son of a poor blacksmith, and was apprenticed at nine years of age, to a bookbinder in Blandford street, and earned his bread by that calling until he was twenty-two! Mr. McGrath, now secretary to the Athenceum, happening five-and-twenty years ago, to enter the shop of Ribeau, observed one of the men zealously studying the book he ought to have been binding. He approached – it was a volume of an Encyclopedia, open at “Electricity.” He entered into conversation with the journeyman, and was astonished to find him a self-taught chemist of no slender dimensions. He presented him with a set of tickets for Davy’s Lectures at the Royal Institution ; and daily, thereafter, might he be seen, pen in hand, just over the clock, opposite the chair.
At last the course terminated; but Farraday’s spirit had received a new impulse, which nothing but dire necessity could have restrained; and from that he was saved by the promptitude with which, on his forwarding a modest outline of his history, with the notes of these lectures, to Davy, that great and good man rushed to the rescue of kindred genius. Sir Humphrey immediately appointed him an assistant in the laboratory; and after two or three years had passed, he found Farraday qualified to act as his secretary. The steps of his subsequent progress are well known; he travelled over the continent with Sir Humphrey and Lady Davy, and he is now what Davy was when he first saw Davy.

The young Michael Faraday, one of four children, having only the most basic of school educations, had to largely educate himself. At fourteen he became apprenticed to a local bookbinder and bookseller George Riebau and, during his seven-year apprenticeship, he read many books, including Isaac Watts’s The Improvement of the Mind, and he enthusiastically implemented the principles and suggestions that it contained. He developed an interest in science, especially in electricity. In particular, he was inspired by the book Conversations in Chemistry by Jane Marcet.