This short essai about the bookbinding trade is taken from The Book of Trades, Or Library of the Useful Arts, Part 3, published by Benjamin Tabart, in three volumes, in 1804-1805.
The book’s evident purpose was to give boys and girls an idea of what options awaited them in their adult life. The Book of Trades was on one level no more than a careers guidance manual also functioned and also provided a more traditional, factual education for its readers.
This chapter describes bookbinding. Of course one should realize that bookbinding is more complicated than that. The author tells us that bookbinding does not require “great ingenuity”. One would object to this characterization of the bookbinding trade. Bookbinding indeed calls for creativity and great sense of judgement, specially today when the bookbinder also is asked to be a restorer.

Enjoy this small essai for what it is, a small window into time looking at eighteen century bookbinding. 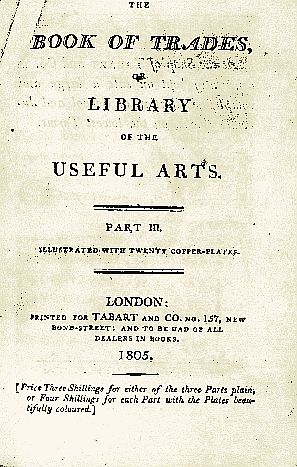 Bookbinding is said to be the art of sewing the several sheets of a book, and securing them with a back and strong paste-board sides, covered with leather. In this business, the operation is is to fold the sheets according to the proper form; that is folios into two leaves, quartos into four, octaves into eight, and so on; this is usually the work of women, with a slip of ivory or box-wood, called a folding-stick: in this they are directed by the catch-words and signatures, which are the letters with the numbers annexed to them at the bottom of the pages of the first one or more leaves in each sheet.
The leaves thus folded and laid over each other in the order of the signatures are beaten on a stone with a heavy hammer, to make them solid and smooth, and then they are pressed. Thus prepared they are sewed in a sewing press, upon packthreads called bands, at a proper distante from each other; which is done by drawing a thread through the middle of each sheet, and giving a turn around each band, beginning with the first, and proceeding to the last.
The common number of bands is six in folios, and five in quartos and octavos. In neat binding a saw is made use of, to make places for the bands, which are sunk into the paper, so the back of the book, when bound, may be smooth, without the appearance of bands. After this the backs are glued, the ends of the bands being opened with a knife, for the more conveniant fixing of the paste-boards, ; then the back is turned with a hammer, the book being fixed in a press between boards, in order to make a groove for admitting the paste-boards. The boards being then applied, holes are made to draw the bands through, the superfluous ends being cut off, and the parts hammered smooth.
The book is then pressed, in order for cutting, which is performed by a machine called plough. After this the book is put into a press called a cutting-press, betwixt two boards, the one lying even with for the knife to run upon, the above, for the knife to cut against.
The book being cut, the paste-boards are squared with a proper pair of iron shears, and it is then ready for sprinkling, gilding, blacking, or marbling the leaves. If the leaves are to be gilt, the book is put between two boards into a press, and when the leaves are rendered very smooth, they are rubbed over with size-water; the gold leaf is then laid on, dried by a fire, and burnished off.
The head-band is now to be added; which is an ornament of thread or silk, placed at the extremities of the book across die leaves, and woven or twisted about a roll of paper. The book is now fit for covering: calf-skin is the most usual cover; this is moistened with water, and cut to the size of the book; the edges are then pared off on a marble stone.
The cover is next smeared over with paste, then streched over the paste-board on the outside, and doubled over the edges within-side. The bookbinder then fixes it firmly between two boards, to make the cover stick the stronger to the paste-boards and the back; on the exact performance of which depends the neatness of the book. The back is now to be warmed by the fire to soften the glue, and the leather of the back is rubbed down with a folding-stick or bodkin, to fix it close to the back of the book. After this it is washed a little paste and water; two blanckleaves on each side are to be pasted down to the cover, and when dry, the leaves are burnished in the press, and the cover rolled on the edges.
The cover is now glazed with the white of an egg, and then polished with a polishing iron. If the book is to be lettered, a piece or pieces of red morocco are pasted between the bands, to receive the title, &c., in gold letters. The letters or other ornaments are made with gilding-tools, engraved in relievo,either on the points of puncheons, or around little cylinders of brass. The puncheons make their impression by being pressed flat down, and the cylinders by being rolled along by a handle, to which they are fitted on an iron stay, or axis. To apply the gold, the binders glaze the parts of the leather with a liquor made of whites of eggs diluted with water, by means of a bit of sponge; and when nearly dry, they slightly oil them, and then lay on pieces of gold leaf; and on these they apply the tools, having first warmed them in a charcoal fire. When the gilding is finished, they rub off the gold, and polish the whole.

The business of the bookbinder, in general, requires no great ingenuity, nor any considerable strengh of body. Journeymen can earn thirty shillings a weak; and much more, if they are good workmen, and are intrusted with very fine work. Formely bookbinding was not a separate trade, but it was united with that of the stationer; it is now, however, carried on alone, and bookbinders are generally employed constantly through the year.
The price of binding is regulated by certain printed lists agreed on between the bookseller and the bookbinder. 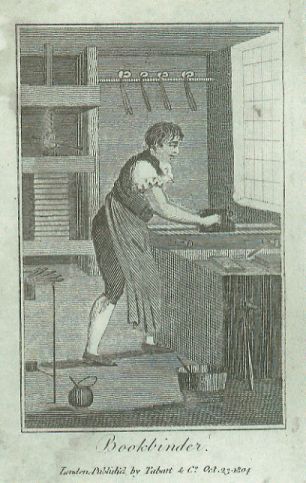 In the plate, the man is represented in the act of cutting the leaves of the book; on his right, on the floor, are his glue-pot and paste-tub; behind him are his tools for gilding; and on his right is the press, for bringing the books in the least possible compass. In London, the business of gilding the leaves of books is a separate employment, and it is done before the boards of the book are covered with the leather.