The Use of Metal in Bound Books

BEFORE the multiplication of books by printing, their covers had more to do with the goldsmith’s art than with that of the binder, whose labours were comparatively restricted.
In those days his functions were merely to fasten together the leaves of the books and place them between two boards, which were then decorated by the workers In precious metals. If skins were used, he covered the boards in leather or parchment; after which they passed into other hands for the fixing of metal clasps and hooks to keep the boards shut, and in most cases nails were also inserted, the round and projecting heads of which preserved the flat surface of the binding.
The high price of manuscripts throughout the Middle Ages, due to the scarcity of parchment, and the time and labour necessary for transcription, explains the luxury of ornament that decorated their outsides. The thick wooden boards -the weight of which was necessary to keep the parchment flat- were enriched with ivories, precious stones, engraved gems, plaques of gold and silver both engraved and filigreed, and the finest enamels. As the books were not often transported from place to place, indeed but little moved, the weight of their covers was not a matter of importance, and these were sometimes made to contain relics of the saints. To all such work the name Byzantine has been applied, probably from the fact that Byzantine art flourished and predominated over that of other countries from the fifth to the twelfth centuries. It has no meaning thus employed as a geographical expression, but is a general term applied to bindings composed of these arts of the gold and silversmith, of the enameller and ivory-carver, executed in the first thirteen centuries of the Christian era, and influenced in spirit by the art of the lower empire. 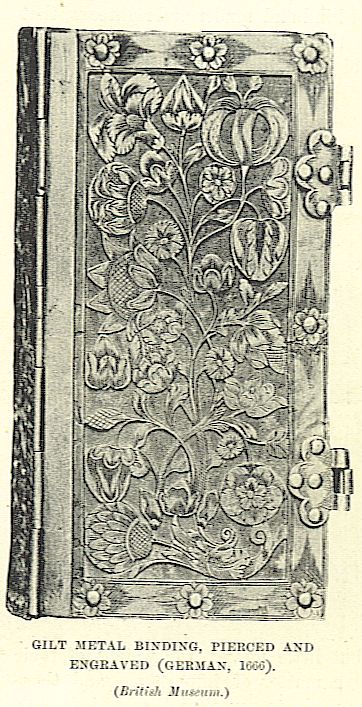 Of these bindings those enriched with sculptured ivory diptychs on the sides are perhaps the earliest. These were already in use in the time’ of the Komans, the name being derived from StWt/^a, the two wings or boards of the pugillaria. These pugillaria, or table-books, consisted of from two to eight leaves of ivory, wood, or metal, wax-covered to take the impression of the stylus. Their preservation naturally suggested a cover, which was made of ebony or boxwood connected by two or more hinges. The pugillaria were more for private memoranda. The diptychs were larger, and contained public acts of consuls or magistrates inscribed on their wax-covered leaves.

The curious in this matter can consult a learned work of Gori on this subject, published at Florence in 1759, and entitled ” Thesaurus Veterum diptychorum Consulariimi et Ecclesiasticorum,” a work in three folio volumes, describing these diptychs and their embellishment; with sculptured ivories,; plates of silver and gold riveted to the wood and finished in delicate workmanship. In the early days of the Church there were carved illustrations of Scriptural subjects, generally in compartments containing the Saviour and the Apostles, and, indeed, carved especially in harmony with the contents of the manuscript, but occasionally the plaques used were relics of pagan days, and then their subjects were naively interpreted in a Christian sense to suit the use made of them. Such a one, for example, is the famous ” Messe des Fous,” with a musical notation of the twelfth century, now in the library at Sens. The ceremonies that accompanied this office de la Circoncision, and which were tolerated for a considerable time, were often of a most grotesque and ; unsuitable kind -hence its name. The ivories of this manuscript represent the triumph of Bacchus, and date probably as far back as the fourth century. It is well reproduced, together with other ivories, in Labarte’s book, Labarte making almost a specialty of depicting this form of book-cover as Libri did of the enamelled ones.
Of the three classes into which these very early bindings most naturally fall, ivories, goldsmith’s work proper, and enamels, the gold and silver work -pierced, chased, or engraved, and often ornamented besides with precious stones.occupies the middle place, enamelled covers apparently originating when gems became rare. 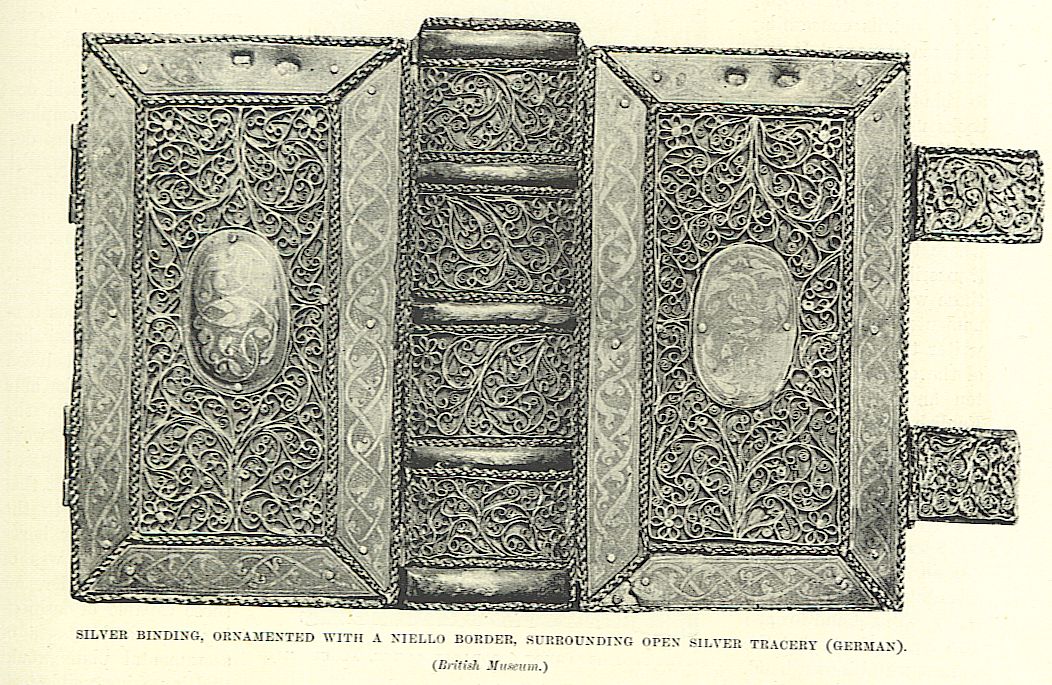 Throughout all ancient historical records mention is made of this second class of bindings, wrought by command for the wealthy to dedicate to the Church, or by the monks themselves as cases worthy of the devotional works which they enclosed, and often placed in homage on the high altar itself. The number that has come down to our times is very small, nor is it surprising that they should not have escaped the plunder that took place during the different vicissitudes of the Church.
Those extant are scattered over various museums and libraries of Europe, and it is unfortunately very rare to find any previous to the twelfth century on the manuscripts for which they were originally designed. Torn from what they once covered on account of their worth, they have either been recaptured and applied to others of later date; or the book itself ceasing to be of value, they have been removed and kept as works of art on account of their beauty or historic interest. From time to time those so preserved have been facsimiled in such books as Labarte’s ” Histoire des Arts Industriels,” Lacroix’s “Moyen Age et la Renaissance,” and Libri’s “Monuments inedits.” M. Libri, it is well known, possessed a larger number of these valuable covers than almost any other collector, and in his book they are reproduced according to their original size and in their original colours.
This form of costly protection to the not less costly MSS. had itself in turn to be protected, and thus these books were often enclosed in boxes which were themselves sometimes the work of the goldsmith, or else in the outer covers of chevrotin, a thin leather or sendal, a rough silk, These coverings were termed in later times chemises, and sometimes chemises a queue, when there was a margin of stuff which, when reading, folded up on to the page and so allowed a hold on the parchment without the risk of soiling it with the fingers. These chemises appear in inventories and catalogues of libraries of the fourteenth and fifteenth centuries. They are very rarely met with, but one of red sendal may be seen in the Louvre enveloping a Book of Hours of St. Louis, and a later modification of red velvet preserves a large folio in the MSS. Department of the British Museum the original book of indentures made between King Henry VII. and John Islippe, Abbot of Westminster, for the foundation of the King’s Chantry, dated the 16th of July in the nineteenth year of his reign (1500). The boards of this book are covered in red damask cut at the top in a wave pattern. The velvet cover lined with damask is loose on the silk-covered boards, except for an attachment here and there where the bosses and clasps of silver-gilt enamelled are affixed to them. It is cut much larger than the book at the head and tail, and is also brought round over the fore-edge, the clasps lying on the side. Attached by silken cords are five impressions of the King’s Great Seal, each contained in a silver box adorned with the royal badges. This book is in the Harleian collection, to which it was presented by Sir Thomas Hoby, of Bisham in the county of Berks, and is altogether very interesting, though the workmanship is more curious than beautiful. A contemporary duplicate copy of the inside was made for use by the same hand. 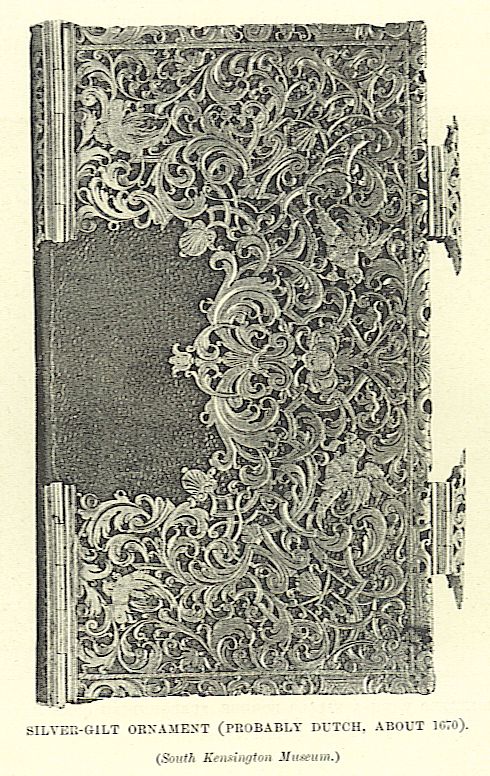 The third class of costly bindings of the Middle Ages are the Limoges enamelled covers – style often employed alone, or else in conjunction with gold and precious stones. These are more fitly studied as enamels than as bindings. They are divided into two classes: the kind known as partitioned or champleve, which is the oldest and dates back to the twelfth century, or perhaps even to the early times of Byzantine art; and the painted, enamels, which did not commence before the second half of the fifteenth century. It is the older style to which M. Libri devotes eleven plates with not unnatural pride, as they are of extreme rarity. The Cluny Museum possesses two splendid plaques which once adorned a book : one of them represents the Adoration of the Magi, the other, Etienne de Muret, founder of the Order of Grandmont, talking with St. Nicolas, and the inscription fixes the date, “+ Nicolas Ert parla a mone Teve de Muret.”
Milan Cathedral has a still older and finer specimen in a book-cover presented, it is said, by the Archbishop Aribert to this church in 1020. It is described in ” Les Arts au Moyen Age,” by Du Sommerard, As the monasteries were the depositories of the arts and sciences until the invention of printing, so there were monks whose special avocation it was to bind the manuscripts which others of their fraternity had written and embellished. Warton, in his ” History of English Poetry,” gives an interesting account of the scarcity of books at this period, and of the details concerning their maintenance. It was part of the sacrist’s duty to bind and clasp the books used in the service of the church, and for this purpose a room called the Scriptorium was set apart in every great abbey where those worked who transcribed, as well as those who bound and ornamented. The same writer tells us how some of the classics were written and bound in the English monasteries, and mentions one Henry, a Benedictine monk, of Hyde Abbey near Winchester, who in the year 1178 transcribed Terence, Boetins, Suetonius, and Claudius, which he bound in one volume, and formed the brazen bosses of the covers, with his own hand. 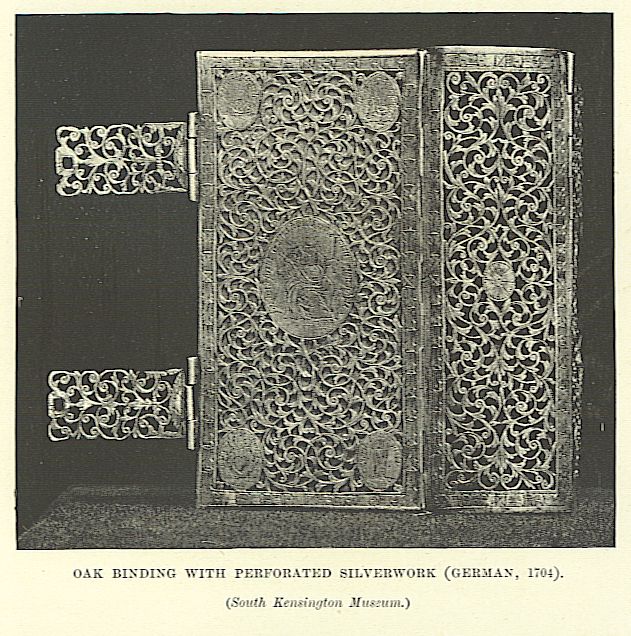