Character of Modern Binding.
It must not be supposed that the binding of books in individual copies, the covers of which are ornamented with particular devices, as seen con ne ensure y to antiquity. It is quite customary at the present day to bind books with covers to suit their owner or match the general bindings of his library. In fact, nearly all French and German books and a large number of those published in England are bound in paper only, so that the purchaser may have them placed in covers that satisfy his taste.
The designing of bookcovers, then, even at the present day, may require a theme that can be neither executed by hand on leather work or duplicated on the press. As the former is a higher branch of the art and is more closely allied with the practice of the past, it will be considered first, but let us look first into the general process of binding a book, as the designer of the cover must be familiar with the details through which the volume passes before it reaches his hands for completion.
Process of Binding.
In bookbinding there are two separate and distinct operations, usually termed forwarding and finislzing. Forwarding’ consists in the assembling of the leaves and the preparation of the book for its cover, the putting on of that cover and the completion of the book ready for its exterior decoration. Finishing’ consists in the decoration of the cover and of the back of the book; forwarding, therefore, is a mechanical process; finishing, an artistic one.
It has been expressed as the opinion of one of the most prominent binders of the day, that a book neatly and cleanly covered is in a very satisfactory condition without any finish ing or decorating, and that many people are in accord with this idea is evinced by the fact that so many books are bound in plain leather vvithout any decoration on their exteriors except a device or title by which they can be recognized. It will be remembered that the Jansen books, described in Art. 26, consisted simply of a well forwarded book with a minimum amount of gilding on its cover, and in some cases none at all.
Securing the Sheets.
In modern bookbinding, the first operation of the binder is to fold all the printed sheets into a section and to gather these sections together in regular order so as to form the volume. After this, the sections are taken one at a time, placed in a frame to hold them, and then sewed, with a continuous thread, backwards and forwards through their backs, thus uniting them and at the same time securing them to upright strings that are fastened in the sewing frame across the backs of the sections, as shown at a, Fig. 18. 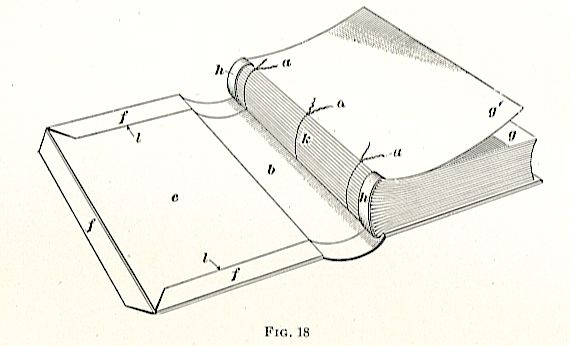