SINGLE KNIFE POWER CUTTERS are manufactured in sizes ranging from 30 to 96 inches. The small sizes are used in binderies, schools and small printing plants, and in large printing plants as auxiliary cutters. The 40, 50 and 60 inch machines are used for heavy duty printing plant work, and the 70, 80 and 90 inch machines are used by paper mills. These machines differ from trimmers in that they generally are more substantially built, the back gauge is easily adjusted, and they are general use machines rather than special purpose as are the trimmers. Component parts of the power cutter are:

Knife. The cutting knife is by far the most important part of any paper cutting machine. With a dull knife, or one of poor quality, even the finest machines will produce unsatisfactory work. (See next chapter.)

Main frame. This large iron casting forms the base to support all other parts of the machine.

Work table. Usually called the bed of the cutter, the table has attached rigid sides extending at exact right angles upward, and to the front and back at exact right angles to the cutter knife.The size of a paper cutter is the distance between the sides of the cutter table. A size 30 1/2 inch cutter measures 36 inches between the sides and will accomodate a 30 inch sheet with enough clearance to prevent difficulty in placing and removing the lifts. In addition, the adjustable back gauge has as its maximum measure the same depth as the distance between the table sides. Therefore, a 30 1/2 inch cutter back gauge will adjust to a maximum cut of 30 1/2 inches and the machine will cut a sheet 30 inches square.

Back gauge. Resting upon the cutter table is a ribbed casting which may be moved toward or away from the knife so the stcck pile may be cut at any given point. Through a slot in the table the back gauge is attached to a worm gear, chain or cable, which in turn is connected with a handwheel at the underneath front of the table. Turning- of this handwheel moves the back gauge as desired. The back gauge should always be moved to a measure from a larger measure to compensate for wear in the adjusting mechanism.

Modern cutters have a back gauge split into three sections held together with bolts and dowel pins. When trimming hooks or magazines, the dowel pins may be removed, the bolts loosened and the sections moved to trim three separate stacks, front, top and bottom, at one cut.
Also attached to the back gauge is a flexible steel measuring tape extending through the upper front of the main frame at the operator’s eye level. As the gauge is moved the position may be read from the location of the tape at a pointer. To prevent slippage after the back gauge is set, a locking clamp is provided holding either the handwheel or the back gauge itself.
The back gauge is fitted with adjusting screws to swing the gauge to where it is parallel with the knife. Precision squaring of paper demands the hack gauge be exactly parallel with the knife and at right angles to the sides of the table.

Clamp. Holding of the paper while it is being cut is done by a horizontal bar parallel with and behind the knife. The clamp is raised out of the way while the stock is being positioned, then lowers and applies necessary pressure to hold the sheets securely while the cut is made, and finally raises again so the cut stock mav be removed. 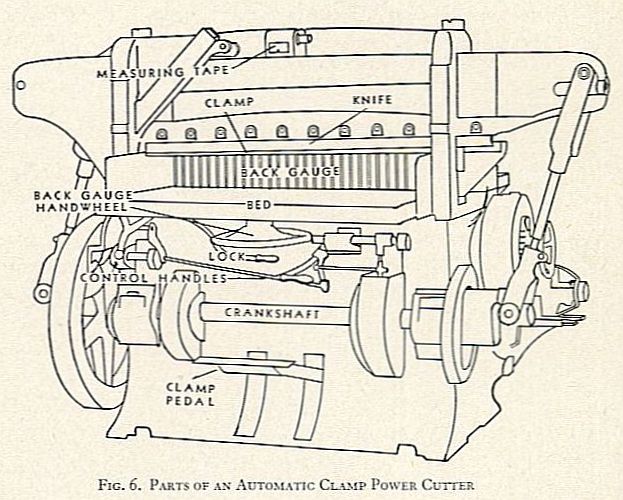 On 30 and 34 inch machines the clamp generally is controlled with a handwheel turning a worm gear as on hand lever machines. Larger machines have clamps which precede the knife automatically, or may be held down by use of a foot treadle. These automatic clamps are operated by friction, spring pressure or hydraulic force.
The face of the clamp is a ribbed casting which inter- leeks with the ribs of the back gauge. To prevent marking the stock being held, the clamp on modern machines is covered with a removable face plate. As the back gauge is moved forward its ribs hit the face plate limiting the minimum cut to the width of the plate, usually 3 inches. To remove this plate, stop the knife in its lowest position and remove the wing nuts visible above and behind the knife. Allow the knife and clamp to return to normal raised position and remove the face plate by tilting it and pulling forward. With the plate removed the back gauge can be  adjusted to make a minimum cut of or y, inch, varying with the size of the machine.

Cutting stick. A hard maple stick  of  1/2  inch square is set into a groove in the cutter table under the knife. The sharp edge of the knife contacts this wood after cutting the bottom sheet in the pile, thereby preventing the dulling effect of metal striking metal. The stick may be used twice 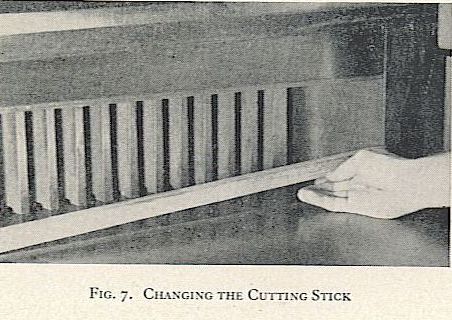 on each of its 4 sides by turning it end for end. A stick should be changed as soon as it has been grooved by the knife to the point that the bottom sheet is not cleanly cut. Should the stick not be perfectly true, the low parts may be built up by inserting strips of thin paper in the holding groove under the low parts.
Do not place chipboard, strawboard or other reclaimed papers under the stock pile as a substitute for changing the cutter stick or adjusting the knife. These papers contain coarse materials which can dull or nick a sharp knife.

Controls. Descent and return of the clamp and knife are done by engaging a clutch on the driving shaft. The clutch is operated by levers under the front of the cutter table, by electrical impulse through push buttons, or by a long rod extending horizontally across tile upper main frame of the machine. The operating levers should be held until the knife strikes the cutter stick, then should be released to allow the stopping mechanism to function.

Driving mechanism. The power source is an electric motor mounted on the machine frame and turning a flywheel which provides the necessary momentum to tile clutch to carry the clamp and knife through the stroke. Driving belts and clutch must be kept in proper adjustment if the machine is to cut maximum widths or tough papers.

Stopping mechanism. As the crankshaft returns the knife to its upper position a cam attached to the shaft strikes a lever which disengages the clutch and applies a brake to bring the motion to a smooth stop. The knife may be stopped in any position by moving the controls.

Maintenance. An orderly routine of upkeep should be established for a cutting machine when it is new which should be adhered to during the entire life of the machine. Maintenance includes cleaning, waxing. lubrication, knife sharpening, adjustment and general repairs. Exact directions for maintenance found in the operating manual of the manufacturer of the machine should be followed. The frequency of each item of maintenance depends upon the amount of use of the machine.

Repair parts. When ordering replacement parts for any make paper cutter, the following information is essential: model name or number, size of the machine, serial slumber, part name and number and the method of shipment desired.

Safety devices. Modern machines have controls which require the use of both hands while the knife is in motion to prevent injury to the operator. Another safety device is a non-repeat attachment which prevents the knife from making a repeat stroke accidentally. A third safety provided is an overload release to stop the machine when too great a strain is placed on the driving mechanism. Many state industrial codes and school regulations require these devices as well as gear, belt and knife guards, on guillotine cutters. The design of safety devices varies considerably lvi th the different sizes and brands of machines.

Points to consider in buying a cutter. The first requirement of any cutting machine is correct size. The machine should have a bed width equal to the diagonal measure of the largest sheet which normally will be cut. This width is necessary to enable the operator to turn the stock pile without lifting it from the bed of tile cutter. Any lifting between cuts tends to disturb the jogged edges and will produce an inaccurate cut.
Closely related to size is strength. This is of secondary importance since all modern cutters are built with enough strength to cut the maximum width paper which the bed will hold, providing the driving mechanism is in good repair and the knife is sharp.
Also related to size are power source and type of clamp. Where a very small machine is needed, as in an office or school, the hand lever machine is satisfactory. All larger operations should have electrically driven cutters. The type of clamp depends on the size and amount of use of the machine. A small power cutter used one or two hours a day can hardly justify the additional expense of an automatic clamp. On the other hand an automatic clamp is a decided time-saver on a machine in constant use.
Safety is another consideration in buying a cutter. The cutter should have two-hand starting levers, a device to prevent the knife from making repeat strokes, suitable guards to cover exposed moving parts, and a mechanism to stop the machine when it is overloaded. Many state labor codes demand approved safety devices on cutters.
Maintenance and durability are important in considering operating costs. Are routine lubrication and adjustment tasks easily and conveniently performed? Is the machine often idle for repairs? Does the manufacturer provide assistance, parts and service quickly?
In addition to the points above, the purchaser of a large cutter should consider attachments or a specialtv machine. Where a machine is to be used for a single class of cutting or trimming a spacing device or a power driven back gauge may reduce cutting time to a small fraction of the time required on a general purpose cutter. Similarly, a specialty trimmer can make several types of cutting operations semi-automatic or completely automatic with substantial time saving results.

Location of a paper cutter. A cutter should be placed in a position free from drafts which would blow the loose sheets. It should be located so the operator is not facing open windows or other strong light sources.
Where space permits the machine should be installed to allow for any future removal of parts. Four feet is necessary above to remove the clamp or knife bar. Clearance should be allowed on each side and the rear equal to the length of the longest shaft which may need to be removed from the machine.